E-commerce has increased tremendously in recent decades because of improvements in information and telecommunications technology along with changes in social lifestyles. More recently, e-grocery (groceries purchased online) including fresh vegetables and fruit, is gaining importance as the most-efficient delivery system in terms of cost and time.

In this respect, this paper evaluated the effect of cooperation-based logistics policies, including horizontal cooperation, on service quality among different supermarkets in Pamplona, Spain.

In simplistic terms horizontal cooperation (collaboration) is the process of sharing the elements of a logistics network between businesses running similar operations. The cooperation is possible between similar companies going to similar customers. In some cases, this can even include competitors. The main benefits of this approach are sharing risks and lowering the costs.

The research team opted for simulation modeling as a logistics optimization technique. They developed an agent-based simulation model for generating scenarios in cooperative and non-cooperative settings, considering the real data obtained from the survey analysis. Thus, a Vehicle Routing Problem was dynamically generated and solved within the simulation framework using a biased-randomization algorithm. 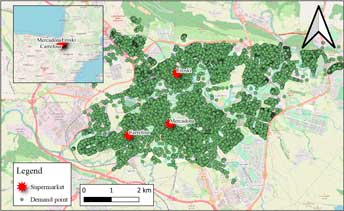