Lot (order) release policies, i.e., the decision which orders to start in production, in what quantity, and at what time, have a significant influence on fab performance.

This paper focuses on optimizing the production of a real-world pre-assembly facility in a high-volume and high-mix semiconductor wafer fab. In simulation software, the researchers built an in-depth, deterministic discrete-event model. With it, they tested release policies in two stages, using real production data and demands.

The semiconductor production process is divided into two stages: frontend and backend.

Within the highly automated frontend manufacturing, semiconductor devices are produced on silicon wafers.

Backend manufacturing is often labor-intensive and geographically separated from frontend manufacturing. There the wafers are cut into pieces, packaged, and shipped to customers. The backend usually consists of pre-assembly, assembly, and a test facility.

In this production optimization study, the researchers focused on the development of an optimal lot release strategy for short-term planning for the high-volume, high-mix pre-assembly facility of the 300 mm wafer fab of the company Infineon Technologies Dresden.

Using simulation models to compare and evaluate different release policies is a common approach in studies on semiconductor manufacturing.

The model contained boundary conditions of the real production system as well as cause-and-effect relationships and restrictions.

Within the scope of this simulation study, a full-factorial experiment design was created. The experiment tested all possible combinations of the underlying control variables. This helped gain insights into the performance of various production policies. The experiment also helped analyze the influence of different levels of the product mix (low, high) and workload (low, medium, high).

In this paper, the research team described a two-staged simulation study aiming at the optimization of the production process. The study was conducted with AnyLogic software for a real-world pre-assembly facility in a high-volume and high-mix semiconductor wafer fab at Infineon Technologies Dresden.

The outcomes of the simulation modeling showed significant improvements in on-time delivery, bottleneck utilization, and throughput. While the differences in performance are minor for a low product mix, they become more significant at a high product mix. For high-mix settings, the best policy depends on the workload and level of work in progress. 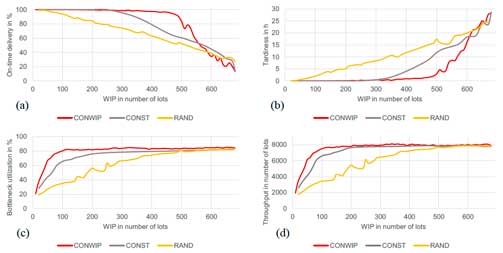