Sustainable development necessitates changes in the way societies and businesses interact. The circular economy concept offers an opportunity to integrate natural ecosystems, businesses, people’s daily lives, and waste management in one sustainable system. In its essence, the idea of the circular economy (CE) is to reduce raw material usage while encouraging the recycling and reusing of products and components.

To understand the limits and challenges of a circular economy, a research team developed a proof-of-concept circular flow simulation model of a generic region.

The question that the model had to answer was how a CE BioHub treatment and resource recovery facility would impact regional income, resource utilization, and the amount of waste going to landfill. 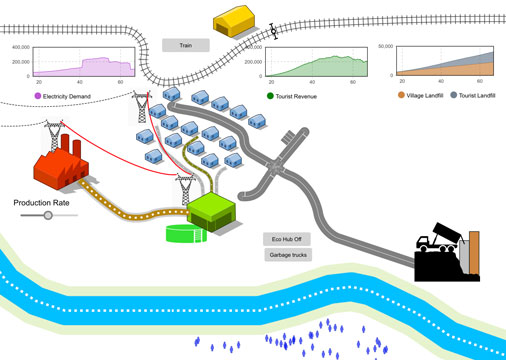 The model included the assumption that the river in the region was a tourist attraction and used for effluent disposal. Dumping waste into the water is detrimental to the well-being of the region. Furthermore, it would negatively impact tourism and jobs and attract penalties from the central government.

With the opposite impact, it was assumed that a new water treatment and recovery plant would have a positive effect on the community and visitors.

For this proof-of-concept circular economy model, the researchers modeled the tourists as agents who generate waste which, in turn, has to be transported to a landfill. The tourists also generate revenue for the region.

The research team chose AnyLogic® for the industry-specific modeling libraries, especially for rail and logistics. The software can combine system dynamics, agent-based models, and discrete event elements within one simulation model. For example, this allowed for modeling agents who represent the community population and the tourists.