According to the FBI, there were 333 active shooting incidents between 2000-2019. This resulted in 2,851 casualties, both dead and injured.

The Purdue Homeland Security Institute (PHSI) measures and optimizes emergency responses to active shooting incidences in addition to evacuation times and their efficiencies. Data that the PHSI produces aids policy makers with better decision making and policy implementation in various institutions or cities and their governments.

The PHSI has also researched and published papers on several factors related to active shooting incidents and emergency related events. These are aimed at advocating people to change their behaviors. The research relative value impacts include:

Since the Columbine tragedy, new policies and tactics for civilians and law enforcement were created. RUN.HIDE.FIGHT. is one such policy. It is effective in reducing casualties in active shooting incidents and the original model incorporates this policy.

The original model was created based on Columbine and presented at the 2019 AnyLogic Conference and is available on the AnyLogic Cloud. It was large, but not complex, and a quarter of it was for validation purposes.

It was based on measuring the effectiveness of the RUN.HIDE.FIGHT. policy. In addition, this model could change different parameters in order to understand the effectiveness of each of these three methods of dealing with an active shooter. This can be illustrated using an example where the parameters could be changed to an all Run scenario for students / staff as the shooter enters the library, and the results then analyzed against the historical situation. 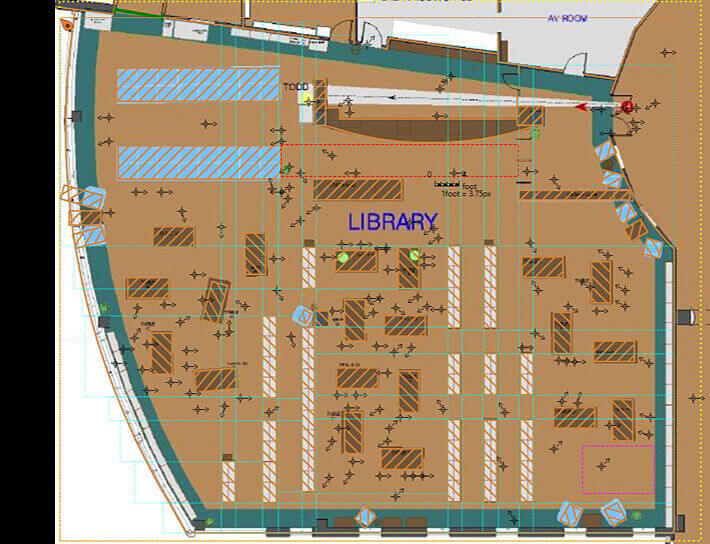 In order for new students to not be required to learn every detail about the model, it was broken down into a significantly smaller model. For this new model to be effective, a new and specific library was created, meaning an incoming student could now focus on research and not on the intricacies of how to model when remaking or updating it.

This library shortens what a new researcher has to do when entering the institute. Using this library and a well-made interface saves time in model development and eases the technical workload for less specialized modelers. As a result, the model completion can be expedited, meaning that researchers are able to focus on other things such as different and better research. As a further result, there should be fewer bugs in the models because there will be less copying and pasting.

An important piece in the library is the line of sight / field of view algorithm which illustrates the shooter’s view of an area using an arc shape, which has certain parameters to set within the API, such as a larger field of view, a longer field of view, and so on. This new line of sight is independent of the environment, which is being built, and it can be placed in the model and be readily available.

In the future, the PHSI would like to turn this library into an emergency response library including such things as:

Smaller and mid-size governments do not have the resources to create their own models. The PHSI can provide the libraries that would cut down on time and these resources, making it quicker, easier, and cheaper to implement a model. Streamlined modeling will provide greater overall value to these policy makers.