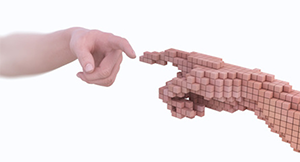 Since the 1940's, simulation and modeling has been used to study, problem-solve and make decisions, to enable a risk-free environment for testing systems in nearly all industries. However, Religion is rarely if ever studied using modeling and simulation, until now.

The Modeling Religion Project (MRP) began July 1st, 2015. A collaboration between the Institute of Bio-Cultural Study of Religion (IBCSR), and the Virginia Modeling, Simulation & Analysis Center (VMASC), and "an ambitious attempt to connect the sciences of modeling and simulation (M&S) with the scientific study of religion (SSR)."

Find out more via the Huffington Post Blog entry by Connor Wood, MRP team member and doctoral candidate in the Graduate Division of Religious Studies at Boston University. The IBCSR website also features anarticle showcasing all team members from both organizations, as well as the purpose, goals and timeline.

Expect multiple follow-ups, such as blogs, outreach efforts, and even a documentary film as the project progresses. And, don't miss this year's AnyLogic Conference in Nashville November 16th and 17th, where an MRP team member will present the model and results thus far.