Canada's oil reserves are third only to Venezuela and Saudi Arabia, and over 95% of these reserves are in the oil sands deposits in the province of Alberta. Oil sands are a deposit of loose sand or partially consolidated sandstone containing petroleum or other hydrocarbons which require in situ methods for production. The in situ method is more costly than the mining method, but it's much less damaging to the environment, requiring only a few hundred meters of land and a nearby water source to operate. It's estimated by the Alberta government that 70-80% of oil in the oil sands is buried too deep for open pit mining; therefore, in situ methods will likely be the future of extracting oil from oil sands (http://www.ramp-alberta.org/resources/development/history/insitu.aspx, 2016).

The most common form of in situ is called Steam Assisted Gravity Drainage (SAGD). With the SAGD technique, a pair of horizontal wells, situated 4 to 6 meters above the other, is drilled from a central well pad. In a plant nearby, water is transformed into steam which then travels through above-ground pipelines to the wells and enters the ground via a steam injection (top) well. The steam heats the heavy oil to a temperature at which it can flow by gravity into the producing (bottom) well. The steam injection and oil production happen continuously and simultaneously (http://www.investopedia.com/terms/o/oilsand.asp#ixzz4dV72hywR, 2016).

Steam Systems, Ltd., a services and consulting firm that specializes in asset network challenges was approached by a large energy company to find smart ways to reduce operational cost while increasing productivity.

Stream Systems achieved this by building a simulation with AnyLogic inside, to replicate the SAGD technique which include use and further development of the AnyLogic Fluid Library. The Fluid Library allowed Stream Systems to model storage and transfer of fluids, bulk matter, or large amounts of discrete items. 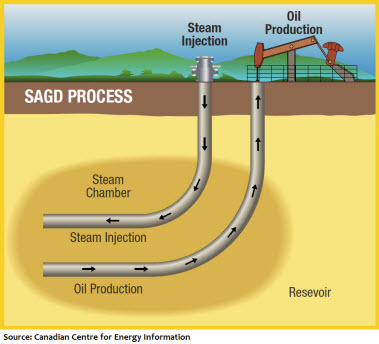