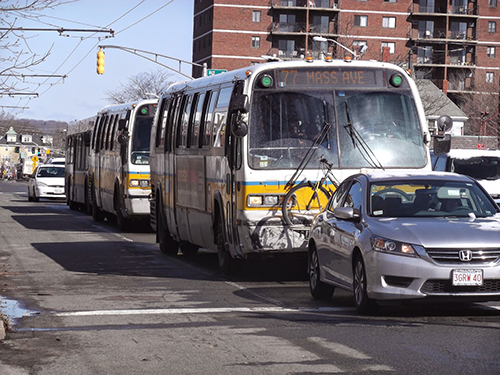 In public transport, bus bunching refers to a group of two or more transit vehicles (such as buses or trains), which were scheduled to be evenly spaced running along the same route, instead running in the same location at the same time, according to Wikipedia. Dave Sprogis, Volunteer Software Developer, and Data Analyst in Watertown, MA noticed a constant complaint from residents about bus service provided by the MBTA. On a route that advertises a bus "every 10 minutes or less" during rush hour, waits were frequently more than 30 minutes, sometimes an hour!

As you probably assume, buses do not start out bunched—they start out evenly spaced according to the schedule that deploys them. However, as the buses run the route, some run a little faster while others run a little slower. There is variability in traffic lights, pedestrian crossings, numbers of passengers loading and unloading, or even differences in driver pace. It does not take long before the spaces between buses change. Once the space between two buses closes, it will continue to close at an accelerated rate until the buses are back-to-back or "bunched". In other words, buses have a natural tendency to bunch.

David used AnyLogic to confirm his thesis that preventing "Bus Bunching" would improve the experience of public transit bus riders. Specifically, he proved that long waits at bus stops would be eliminated, and bus crowding would be dampened by preventing minor delays to an individual bus before they snowball into the phenomenon we call "Bus Bunching."

Find out why Dave recommends that the MBTA implement "uber-fication" of buses – a simple "connected" app that advises drivers when to wait based on network metrics, enforcing the "equilibrium" policy, by watching his presentation or reading the case study. 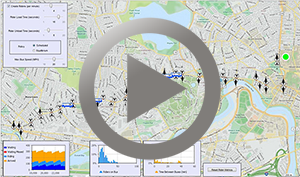